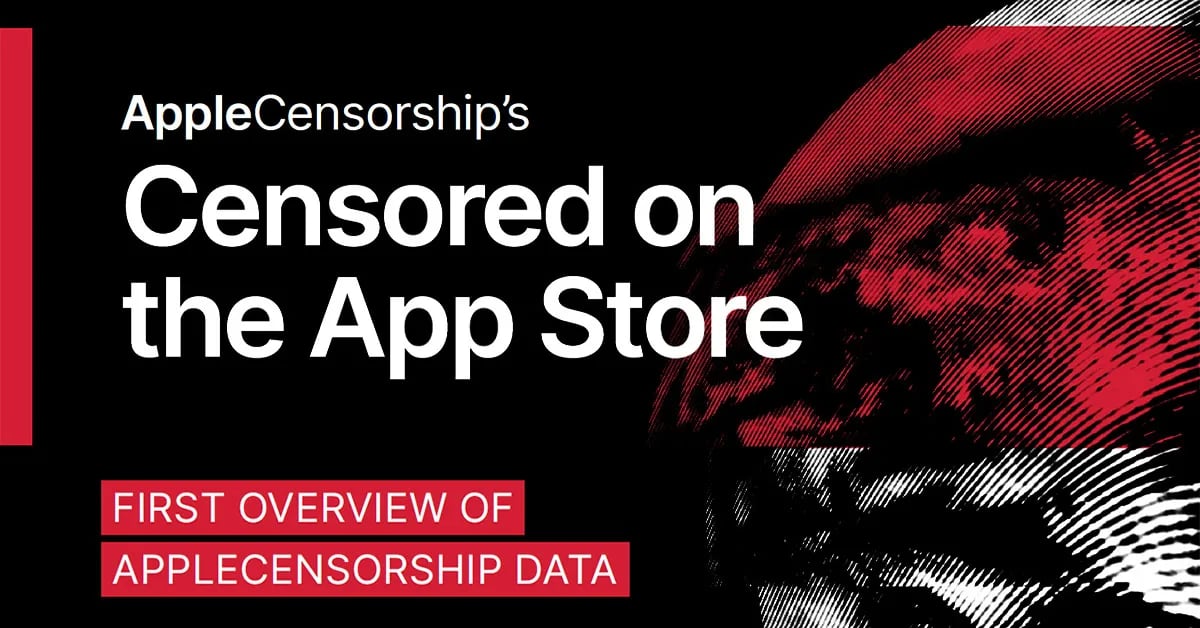 Today, in “Censored on the App Store”, AppleCensorship reveals in its new report the scale of unavailability of apps in Apple’s App Store. This report is based on data collected from the AppleCensorship.com website.

Using data from user tests conducted since 2019, we estimate that there are a staggering 29 million instances of app unavailability across Apple’s 155 App Stores. In its transparency reports, over the period from July, 2018 until December, 2020, Apple claims that there have been a total of 1470 app removals based on legal and platform violations. 1182 of these app removals occurred in mainland China.

It is difficult to estimate how many of these removals are instances of direct censorship by Apple or instances of Apple acting at the request or on behalf of local governments. However, analysis of the data indicates that there are a number of countries, as well as app categories, that have a significantly high level of app unavailability.

In particular, News and Social Networking apps are amongst the most censored. Given that these app categories are the most likely to contain political content, and to be used for political advocacy, the data from this report points towards a statistically significant pattern of politically motivated censorship in many countries. The removal by Apple of Alexei Navalny’s voting app at the request of the Russian government is a recent example of this type of censorship.

If Apple is to take its self-proclaimed values seriously, it should be more transparent about the patterns and cases highlighted in our report. Apple makes little effort to acknowledge or explain these anomalous figures, or the governmental pressures which underlie them. We can only predict that continued research, and increasing pressure from repressive governments around the world, will result in worsening censorship. This can only be stopped if Apple decides to prioritize its customers and their rights over corporate profit.

To conduct this report, AppleCensorship.com collected data using the website’s primary feature, the App Store Monitor (ASM). The ASM allows visitors to the website to test the availability of any iOS app around the world by crawling the world’s 155 App Stores. To date, over 4 million tests have been conducted on the AppleCensorship.com website. The raw data from this research can be found here.

The ASM was used – both in targeted manual searches for specific apps and regional stores, and in automated periodic searches – to uncover instances of regional unavailability on the App Store. Collating data across the 155 regional App Stores, we are able to generate a picture of the scale of Apple’s regional app removals, where they happen most, and which app categories are most at risk of censorship.

Misleadingly, Apple often refers to a single App Store, implicitly the US “storefront”, that has high rates of app availability, to conceal patterns of censorship in other countries. Users in one country remain largely oblivious to the unavailability of apps in other territories, unless they use the ASM or manually check the App Store pages of other regional App Stores. Furthermore, the App Store’s category system does not readily allow the public to focus attention on the most heavily censored subcategories – for instance, Tibetan apps or apps with an LGBTQ+ focus, both of which see disproportionately high rates of censorship.

“The very need to build this tool to monitor Apple’s behaviour, and to conduct ongoing research into how often, and in what circumstances, Apple removes apps from regional stores due to governmental pressure, is itself an indictment of the company’s lack of transparency,” said Benjamin Ismail, AppleCensorship Project Director.

Apple actively censors their own App Stores all around the world, yet reveals few details on which apps they censor and why they even censor in the first place. Instead of waiting for Apple to come clean about its censorship practices, in January, 2019, GreatFire.org launched AppleCensorship, allowing anybody to check for instances of Apple censorship in every Apple App Store around the world.

Apple must stop depriving its users of their fundamental rights and, at the same time, end its unethical practices which violate human rights principles and international standards. We simply ask that Apple operate according to their stated values – respect for human rights and fundamental freedoms.